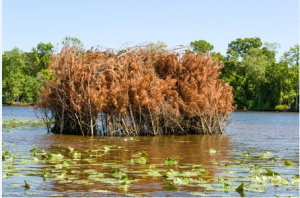 With duck hunting, you don’t want the ducks to see you. That way, as they fly by and you’re hidden, they are “blind” to the fact that you’re there pulling the trigger and going to–hopefully– catch them.

A duck blind is a cover device hunters use so they won’t easily be detected by ducks they’re trying to hunt and kill. Generally, duck blinds may be stable or mobile. They’re usually camouflaged in some way in order to blend in with the surroundings and offer hunters some protection from the elements.

If you’re thinking of building your own duck blind, there are plenty of things to consider. First of all, will you be bringing a dog with you? If so, the blind should have easy access for Fido. Next, will you need shelving or some section of the blind to store stuff such as tools or food? Might you need a bench for sitting down to eat a meal? Make a list of ideas for your duck blind before you set out to build one. You can cross off the unrealistic items, while gathering supplies for those things which you truly will need to make a great blind.

Since duck blinds are outdoors, they’re going to deal with the weather. Therefore, don’t be so cheap when buying building materials. It’s better to have a sturdy duck blind than one that blows away when the howling wind hits it.

Also, the lower to the ground the duck blind the better. If you make one that’s vertically higher than 5 feet you’re more likely to be detected by approaching ducks. It’s best to literally keep a “low profile” when duck hunting.

Rather than building a blind at your house or in your yard and then moving it to where you want it on the land you’ll be hunting, you should always build your duck blind on the exact site where you want it. Unless they’re built to be mobile, duck blinds aren’t easy to move!

At your hunting site, do whatever you can to camouflage your blind so that it blends in with its surroundings. Ducks, like people, can tell when something stands out. A combination of man-made camouflage tarps and the natural camouflage around the site should work well in disguising your blind so that ducks don’t detect it.